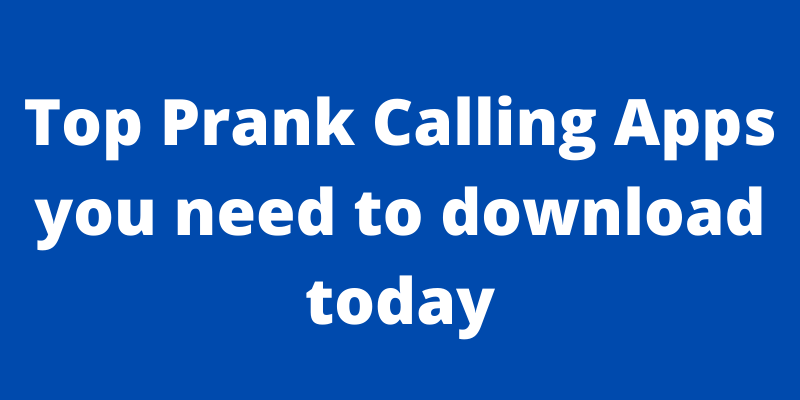 Although prank calls remain among the funniest practical jokes you can do on your buddies, fewer and fewer people are doing them. The likelihood of a person’s caller ID being exposed and being traced back to them is a risk many aren’t willing to make today.

What if I told you there was still a way to have your prank calling fun with your details hidden and secure? Enter Prank Calling Apps.

Not only can you prank call without your details being discovered, but prank calls are easier and more enjoyable to pull off.

Prank calling apps have exploded in popularity due to the convenience and unique functions they offer. So if you’re ready to get that much-needed payback on someone read on!

If the name Ownage Pranks sounds somewhat familiar then its probably because you’ve encountered one of their hilarious youtube pranks calls online.

Ownage pranks have now come up with their very own prank calling app letting you send pre-recorded prank calls to your buddies while you listen in.

With over 100+ prank scripts readily available, each call has something unique to offer- an automated call bombarding you with random cat facts or a disgruntled boyfriend telling you to stay away from his girl.

Prank scripts are voiced and recorded prior by its own talented actors including Russell Johnson, responsible for the creation of the channel and legendary characters featured in the show.

If you’re worried about a suspicious friend catching onto you, don’t worry as a fake caller ID will be allocated keeping you anonymous.

Pre-recordings are also convincing during calls as the app’s AI algorithm has the ability to recognize keywords and detect silence, making responses at the right times.

Not only do conversations feel authentic, but a prerecording can emulate a human being so well that your friends will never suspect a thing.

Instead of prank calling a friend you will be the one to receive an incoming call, and unbeknown to the people around you it’s actually a fake call with nobody speaking on the other side.

This fake calling app is especially useful for getting out of bad situations, like being stuck in a boring work meeting or social occasion.

Schedule an incoming call and tell your colleagues or acquaintances you need to leave; giving you a legitimate excuse as nobody will suspect anything out of the ordinary.

Fake Incoming Call Prank has an impressive array of customization features letting you create an identity for your fake incoming caller. Here you will be able to choose their name, number and picture.

For quick pranks there is a selection of characters from its gallery saving you the trouble of making one, these include a fake girlfriend, boyfriend and boss.

The app also has a timer function so incoming calls can be delayed for later times throughout the day, receive your fake call in 10 seconds, 30 seconds, 1 minute, 5 minutes, 10 minutes, 15 minutes or 20 minutes. To make an instant call press Call now.

Perhaps the most challenging task during a prank call is not what you say but how you say it. Delivery is everything, and changing your voice to fool your friends is a must.

Unfortunately, many of us don’t realize how distinct we truly sound, even when we’re trying our best to speak differently. If imitating others isn’t your forte Voice Changer with Effects is what you need, this app lets you change your voice effortlessly.

The app excels with the number of voice modifications that are offered compared to other voice changing apps, providing 40 sound effects all in all.

Scare family members by sounding like a zombie or monster or pretend you’ve had one too many drinks by using the drunk option. Other hilarious voice effects include squirrel, extraterrestrial and alien.

How to change your voice

Voice Changer with effects is a straightforward app, to make a voice modification you’ll need to make a recording.

Do this by pressing the record button and speaking into the phone’s microphone, afterwards you will be able to apply the various voice effects mentioned above.