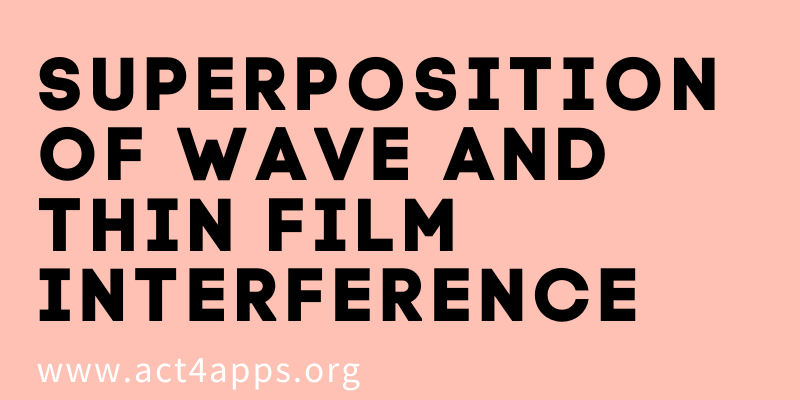 Principle of Superposition of Waves

Principle of Superposition of waves means the resultant displacement of all the waves in the medium at a particular point is the vector sum of the displacement of the individual waves.

Types of Superposition of Waves

Interference is the phenomenon where two or more waves superpose to form a resultant wave with an intensity higher or lower than the individual intensity values of the waves.

Constructive Interference occurs when the two waves that superpose are in the same phase. The resultant wave will have an amplitude which s equal to the sum of the amplitudes of the individual waves which results in maximum amplitudes of light.

The intensity of the resultant wave will be minimum.

What is Thin Film Interference?

The Thin Film Interference occurs when the two light waves are reflected from two surfaces which are at a distance comparable to the wavelength of light. When the two light waves reflecting from the top surface and the bottom surface interfere with each other we get to see different colour patterns. The light rays reaching the boundary between two rays gets partially reflected and partially transmitted. If the two medium is air and thin film, then there are two reflections that occur on the top surface and lower surface of the thin film.

Thin Film Interference is a common phenomenon that we encounter in our everyday life. The most common example is the colours on a soap bubble. In case of a soap bubble, the light waves that travel through the air hit the surface of the bubble and get reflected. Further, the rays that get transmitted reaches the lower film air interface and it gets reflected from the lower surface.